Who Knew a Deployed Son and One Care Package Could Impact So Many?

Brandon Varn was 18 years old when he joined the army. Two weeks into basic training, 9/11 happened. Brandon’s basic training was then accelerated from 15 weeks to 5 weeks. A little over a year later, he was deployed and terrified (his words).

But then a package came in the mail from Patti Patton Bader, Brandon’s Mom. Receiving that package really helped him personally.

“I was in Kuwait and heading into Iraq when I got that first package. I remember sitting on the howitzer and the sun was going down. It was powerful. I remember thinking what could be inside? Things that remind me of home? That moment reassured me that my mom was going to be there to help me.”

That moment and that one care package is what started it all. When Brandon was deployed, Patti’s Dad was the one who told her to “get to work”. That Brandon was going to need lots of care packages. What she didn’t realize then was that getting to work would eventually mean founding a national non-profit to help deployed troops, veterans, and military families.

Pattie sent package after package – one a week. The first chance Brandon got to speak to his mom her first words were “How are you? Are you getting the care packages? Is it enough?”

It was not enough. No one else was getting care packages and supplies were desperately needed. Turns out, Brandon had been sharing supplies with his unit.

Patti then knew what she had to do. 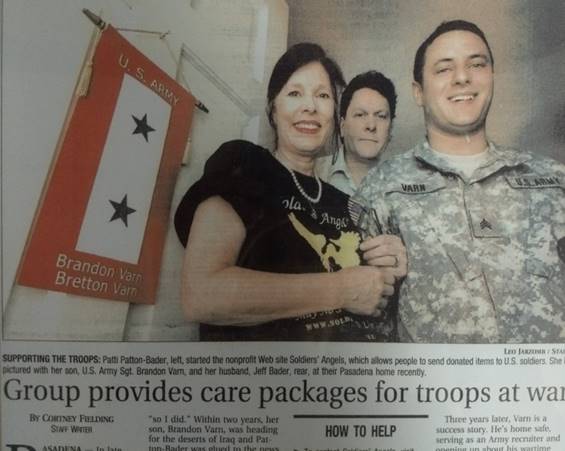 “I felt like everything that I had done and learned in my life made me ready for this moment. And I knew what to do. I told my husband we were going to need a lot more money and a lot more help. I got on the internet and set-up a website and people started coming in droves to adopt a soldier.” – Patti Patton-Bader

…And Brandon started seeing that.

“Somehow she started sending TONS of packages. Like 20 a day. At that point, people really needed toiletries. It was bad. It was crazy the amount of support she was able to send. Even when we were getting back, she was helping numerous people in my unit I didn’t even know about. People had pen pals, they were connecting with strangers overseas… My mom was even able to get 5 barracks of soldiers sheets, pillows, and toiletries because she found out no one had sheets.” 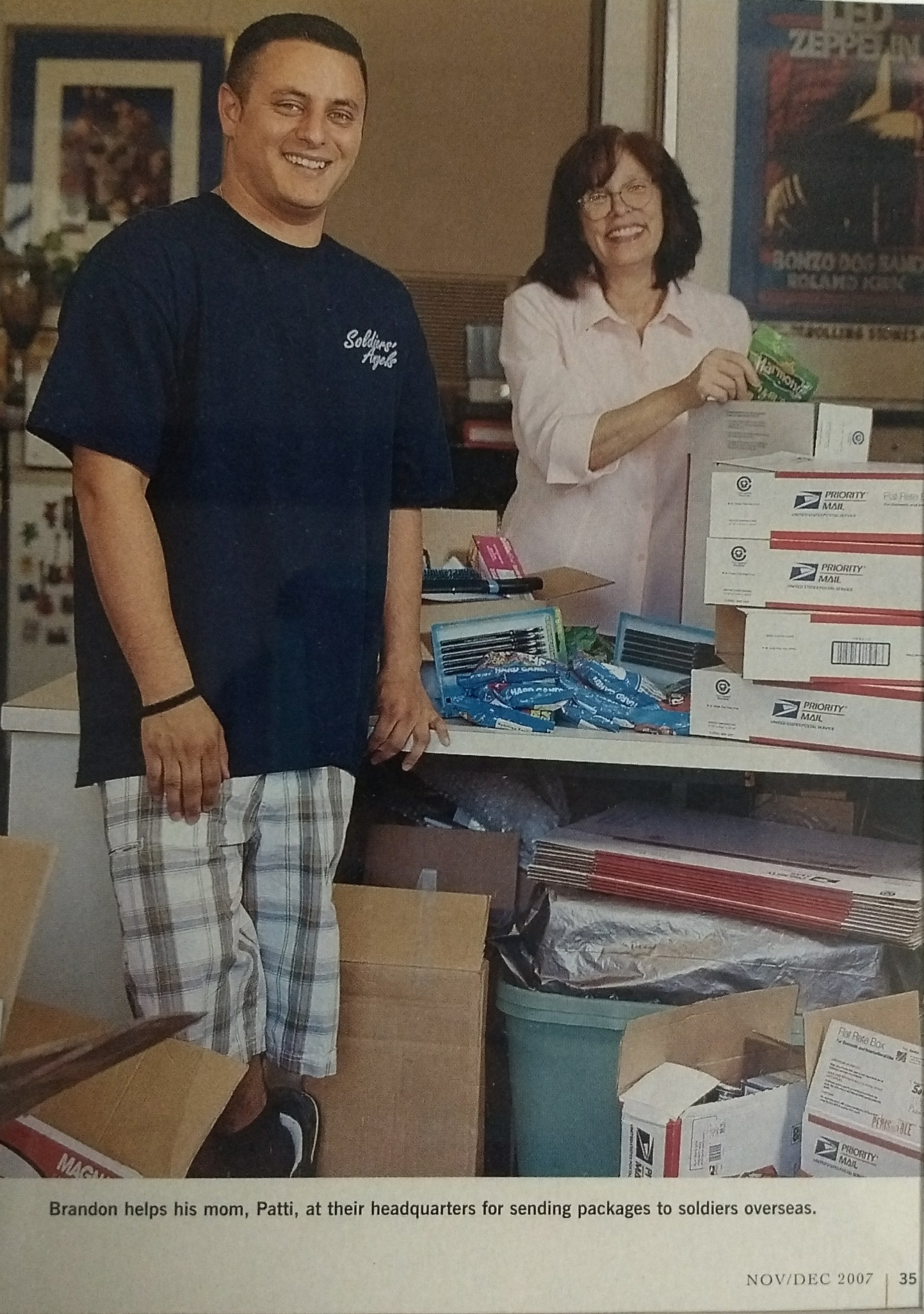 When Brandon came home, there was a lot of support he still needed.

“I’ll never forget coming home and kissing the ground. I had a hard time processing things that happened to me while I was there. I drank for numerous years when I came back. But Soldiers’ Angels was there to help me. My mom was there for me every step of the way. ”

Transitioning back to civilian life after all he experienced was very hard. But Pattie was right there with him. As she was building Soldiers’ Angels, she was taking Brandon all over the country to speak – something he needed.

“It really helped me to communicate with people and control my interactions with people. I can’t say enough about her for bringing me into the process and trying to nurture me in this way.”

What Brandon Thinks of all his Mom has Accomplished

“I think it’s pretty amazing. She was capable of organizing one of the largest nonprofits at that time. She really changed the lives of a lot of those soldiers while they were there.”

Where is Brandon Now?

Brandon went back to school and is now the V.P. of Marketing for Road Armor. He’s working on building out their website (he’s also a programmer) among other marketing projects. Road Armor is “the ultimate replacement bumper. A bumper that adds utility and function to your vehicle while simultaneously making it a safer place for its occupants.” He loves what he does!