Sometimes it is unbelievable how connected we are these days. With cellphones at our hips, tablets at our sides, and laptops we can take anywhere, connecting with someone is as easy as reaching for the nearest electronic device.

What would it be like to be suddenly disconnected?

What if you lost the ability to use those devices you are so used to having?

For many of our wounded warriors, that is exactly what happens.

According to the Department of Veterans Affairs, there are more than 850 servicemembers and veterans from Operation Iraqi Freedom/ Operation Enduring Freedom (OIF/OEF) who have major limb loss. 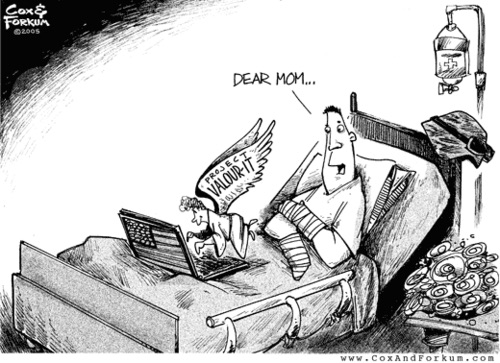 longer use due to injury and to help them navigate the world a little easier. It all started with Captain Charles “Chuck” Ziegenfuss. During his deployment, Captain  Ziegenfuss started blogging about his experiences. His stories and humor gained him a lot of readers.

While serving as commander of a tank company in Iraq in June 2005, he was wounded by an IED and sustained many injuries. During his recovery, he tried to return to his blog, but serious hand injuries made it difficult to type.

Here is an excerpt from an essay he wrote that best describes what happened next.

“At WRAMC, as I slowly began to regain awareness and then began the even slower process of recovery, a charity I’d worked with in Iraq contacted me. The charity, Soldiers’ Angels, sent many care packages and letters to my soldiers, whom I’d identified as those who received very little mail. Those soldiers were inundated with mail after that, and I wrote often to the founder of the charity to thank her for the outstanding support. The charity contacted me (through my wife) at Walter Reed and asked if there was anything I needed. I wanted more than anything to stay in contact with my soldiers and asked if there was any way they could get me a laptop so I could email them. They provided a laptop, and then software to use the laptop with only my voice—as I was only able to use a single finger to type.

That laptop gave me an intangible gift: the ability to see that my injuries were not the end of the world as I knew it. I was finally able to do one thing I could do before being injured. It gave me hope for recovery. I then asked Soldiers’ Angels if there was a way we could do the same thing for other wounded soldiers. They readily agreed, and over the next few weeks, Project Valour-IT (Voice Activated Laptops for Our Injured Troops) began.”

In addition to voice controlled laptops, the Valor IT program provides active and whole-body video games (like Wii Sports or Xbox Kinect) to help with physical therapy, iPads with tools and applications that help TBI patients manage their memory loss and time management skills, and GPS systems to help with the spatial challenges that are common in brain injury patients.

These devices are so important to the people who receive them because of the significant impact they can have on recovery – not just in healing but in reconnecting with family and friends.

Valor IT has blossomed since 2005. We’ve made so many great partnerships that help us continue to provide adaptive laptops and other technology to wounded warriors. Cym Lowell, author of Jaspar’s War, teamed up with us and created an initiative called Operation Next Chapter that pledges 100% of the proceeds for his book, Jaspar’s War to Soldiers’ Angels. In addition to Cyms efforts, we have some great partners who regularly donate to the cause: Solow Family Foundation, Google, Rackspace, and McDermott Will & Emery.

Putting a voice-controlled laptop in front of a wounded hero gives them back a piece of their life and hope that they can do what they did before, even if they have to do it a bit differently now.

To be eligible, you must be a Post 9-11 wounded, ill and injured veteran and must have injuries which require computer and electronics accommodations. To apply for Valor-IT, please click here to complete the online application. Before approval, you will be required to provide proof of service, proof of injury, and a letter from the VA case manager validating the need for the disability accommodations.

Want to help? A new laptop computer with the necessary software to accommodate a wounded warrior’s disabilities costs about $800 when purchased using our special discounts. Please consider donating to sponsor a wounded warrior.