Send love to our heroes with a Valentine's Day card! Learn more about Valentines for Veterans here.

March is Women’s History Month, a month to honor and pay tribute to the women in our history who have made great contributions to our society, our environment, our history, and our communities. There are so many women who have sacrificed for the sake of their convictions and for the sake of our country. Here are a few that come to mind for us.

Also know in her hometown of Richmond, VA as “Crazy Bet”. Elizabeth had a conviction to eradicate slavery and so during the Civil War, she began working for the Union. Elizabeth was granted access to Libby Hill prison, where the Confederate army held Union soldiers, to bring food, clothing, writing paper, and other things to the soldiers imprisoned there. What the confederate army didn’t know was that she was also aiding prisoners in escape attempts and passing them information about safe houses. She was also able to get a Union sympathizer appointed to the prison staff.

In addition to this, she ran a very elaborate spy operation that was able to infiltrate the White House of the Confederacy, and the War and Navy Departments of the Confederacy. George H. Sharpe, intelligence officer for the Army of the Potomac, credited her with “the greater portion of our intelligence in 1864-65.” In fact, he appointed her postmaster of Richmond.

So why the nickname? She acted crazy as a cover, often muttering to herself when she walked down the street. 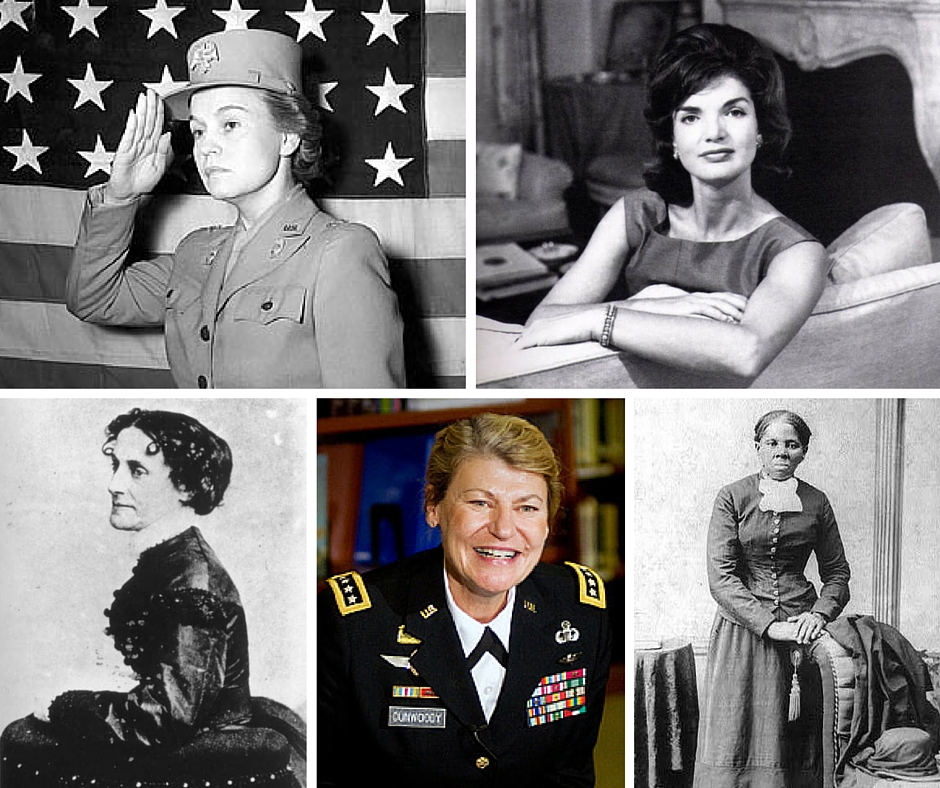 Ann Dunwoody (GEN RET) was the first woman in the US Military to reach the rank of four-star officer in the United States Army, November 14, 2008. She is the former commanding general of one of the Army’s largest commands, the U.S. Army Materiel Command.

Responsible for research and development, installation and contingency contracting, foreign military sales, supply chain management, and more, Dunwoody led the transformation of the Army’s logistics organizations and supported the largest deployment and redeployment of U.S. forces since WWII. U.S. Army Chief of Staff General Ray Odierno called her “quite simply the best logistician the Army has ever had.”

When the Civil War broke out, Harriet volunteered for the Union Army. She started as a cook and nurse and moved to becoming a scout and spy. Tubman was a key advisor in the Combahee River Raid on June 2, 1863. She was able to guide three steamboats around Confederate mines in the waters leading to the shore where Union troops then fired to the plantations, seized thousands of dollars worth of food and supplies, and freed more than 700 slaves.

Wife of the 35th President of the United States, Jackie Kennedy was a symbol of grace and strength during a tragic time for our country. She was also very involved in the preservation of our cultural heritage. The results of her work can be seen in Lafayette Square across from the White House, and in Grand Central Station in New York City. Jackie has also been a role model for every First Lady that followed her.

As the United States edged closer to entering WWII, and men were being drafted for military service, thousands of letters a day were being sent to the capital from women wanting to know what they could do to aid in the war effort. Looking for a solution to an overwhelming amount of mail, General David Searles asked Oveta to direct a woman’s initiative in support of the army. It took some convincing but Oveta took the position and moved to Washington to head the Women’s Interest Section, War Department Bureau of Public Relations.

“For every one of the 1,500,000 men in the Army today, there are four or five women—mothers, wives, sisters, sweethearts—who are closely and personally interested. Mothers are more interested in their son’s health than they are in army maneuvers. They want to know what their man or boy is doing in his recreational hours, what opportunities the men have for training and promotion, about the health of camps and the provisions made for religious life.” – Oveta Culp Hobby

Once we entered war, the United States Army was faced with a serious drain on resources that prompted Henry Stimson, secretary of war, and General George Marshall to wonder which military jobs women could do with minimal training. This resulted in the formation of a women’s army, called the Women’s Army Auxiliary Corps (WAAC). Ovetta was appointed to draft a plan and lead the organization. Because of her efforts in WWII, she was the first woman to be awarded the U.S. Army Distinguished Service Medal.

And so many more!

There are so many brave, courageous women who have altered the course of U.S. history and made an impact. We encourage you to look them up and learn about them in the month of March. Make sure to check out our Facebook page where we will be honoring more women during the month of March.