Several weeks ago, a deployed Chaplain reached out to the Soldiers’ Angels Chaplain Support Team with a special request: Ugly Christmas Sweaters and lots of them! He was planning a holiday party for the service members he supported and hoped that something fun & silly might bring a smile to their faces.

The Angels on the Chaplain Support Team didn’t even think twice! They gathered boxes of sweaters and got them in the mail as quickly as possible to the Chaplain. The Angels knew this mission was about more than providing some party clothes— this was about sending something that would boost morale during a time of the year that is particularly difficult on deployed troops. Something silly, like receiving an ugly sweater to wear to the base holiday party, might be just the thing to get them through the holidays.

After the Chaplain received the first few sweaters, he had this to say:

“Hope all is well. Yes, we just picked up the mail yesterday and we received 7 ugly sweaters. Some soldiers saw them and they were so excited to grab them, but I told them not to. LOL. The joy that came over my face and the few soldiers that saw them was priceless. I can’t wait for the rest to get here and to distribute them in December.”

When we received that message back, we knew we were on track for making the holiday party a memorable one for deployed! So, we decided to take it to the next level! One of the annual traditions at Soldiers’ Angels is to have a staff Ugly Sweater Contest and ask our Facebook followers to vote for the winner. But what if this year we made the contest be our staff against the deployed service members? Stateside vs. Deployed!

We coordinated with the Chaplain once more and shared the idea with him. He loved it and agreed to send photos back as soon as he had them. So… we crossed our fingers and waited… hoping we would actually get the photos back in time.

Thankfully, we did!! And so — on National Ugly Sweater Day, just hours after the deployed service members celebrated their holiday party in their sweaters— we were able to share our first-ever (and first of what will hopefully become an annual tradition) “Stateside vs. Deployed Ugly Sweater Contest!”

And the Winner is…

Thank you to everyone who took the time to vote in our 1st ever Stateside vs. Deployed Ugly Sweater Contest! It was such a fun way to celebrate the season and felt like we shared a moment with these deployed men and women, even from the other side of the world! After the holidays, we’ll be preparing a special prize to send to them, so stay tuned for that!!

Click here or the post below to see it on our Facebook page and see all of the votes and enjoy the sweaters and smiles. Not on Facebook? Scroll to the bottom of the post to see a slideshow of the contest photos. 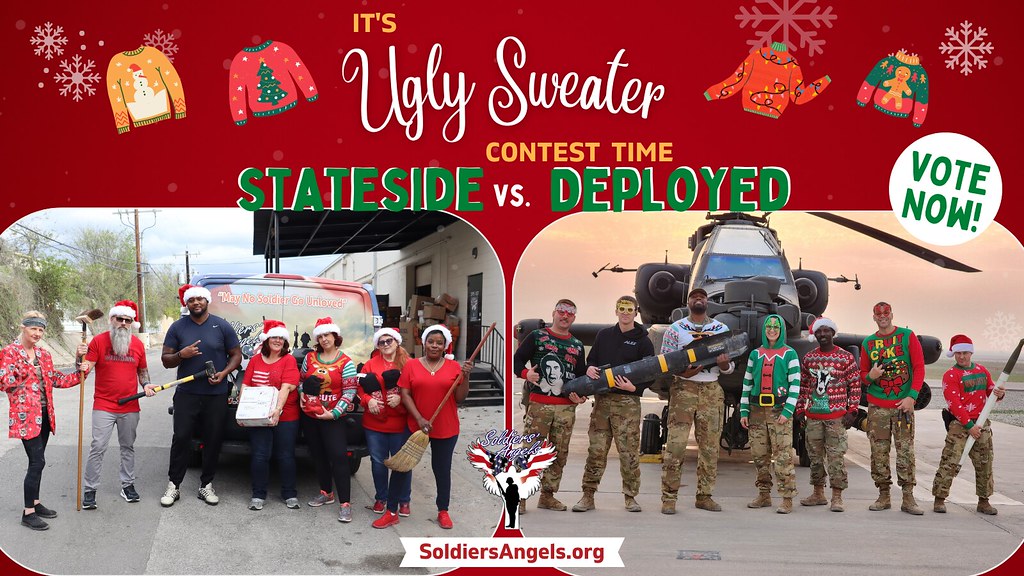