One of the many ways Soldiers’ Angels serves injured, ill, or veteran military personnel is through our VA Medical Center Support. We have volunteers across the country AND in Landstuhl, Germany who work within the VA Medical Centers to coordinate events and activities, organize corporate partner participation, and visit patients.

Here’s more about Elaine and what she does with Soldiers’ Angels. 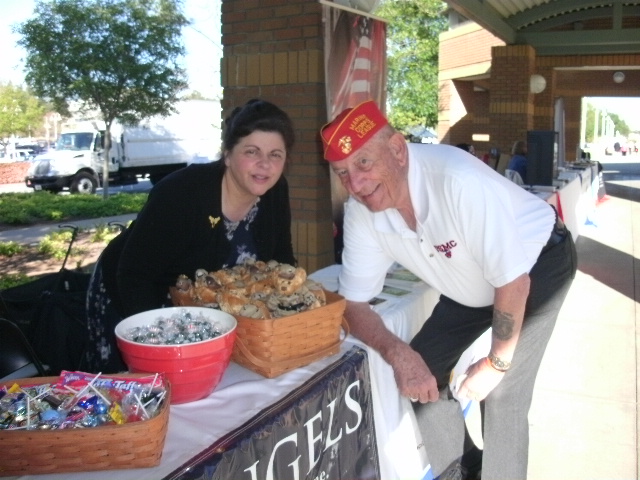 I was already involved for about a year with Operation AC with adopting deployed Troops and sending them Altama Combat Boots. Then while listening to Rush Limbaugh on the radio, a caller was talking about supporting our Troops and she mentioned “Soldiers’ Angels.”  Soldiers’ Angels was a new program then, so I looked it up, liked what I saw and joined up. It’s been the best experience ever.

Our Troops & Veterans have sacrificed so much, including risking their own lives to defend & protect us.  So giving genuine support back to them, is the least we can do.  It is a blessing, joy and honor to serve them and offer all the support possible, due them.

What’s one word that describes the organization?

“SERVING THOSE WHO SERVED” (sorry, I can’t sum it up in just one word!)

Two of my brothers served, many uncles & cousins as well.

Tell us about one of your favorite moments as a volunteer for Soldiers’ Angels:

About 4 years ago as I was baking chocolate chip cookies in the VA kitchen, a young PTSD Vet poked his head in and asked what I was doing. I told him that I was baking Chocolate Chip Cookies for him and the others. He stared a moment longer and then quickly left. I wasn’t sure if I had said the wrong thing or not, because of how abruptly he left without even saying a word. About 10 minutes later a VA staff member walked in and her eyes were red with tears. I asked what was wrong and she explained to me that, that same Vet was standing down the hall with tears dripping down his cheeks. She had asked him “what was the matter” and he replied that as a baby, he had been abandoned by his mother and lived in Foster Homes all his life, up until he joined the Marines. He told her that “all he ever wanted was a mom who would bake him cookies”… not his mom or any of the foster moms did that for him… but a Soldiers’ Angel did.

Well I started crying as well and I made doggone sure than as long as that young Veteran was in the PTSD Program, he got freshly baked cookies from us. I have about a million more stories, but that one always “gets to me.” It’s the small acts of kindness that can make a huge difference in somebody’s life.

Want to learn more about getting involved with Soldiers’ Angels? Click here.