Dive into a Great New Book For a Good Cause

When was the last time you got lost in a good horror novel? Here’s a good reason to grab a copy of G.J. Wise’s debut novel, Spiritwood: 10% of all royalties go to Soldiers’ Angels!

When was the last time you got lost in a good horror novel?

Here’s a good reason to grab a copy of G.J. Wise’s debut novel, Spiritwood: 10% of all royalties go to Soldiers’ Angels! 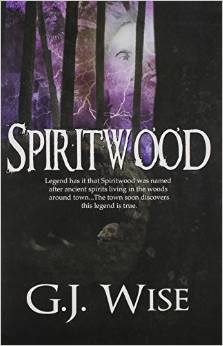 Spiritwood was released December 1st, 2014 and is already receiving rave reviews. The novel is about the town of Spiritwood. Legend has it Spiritwood was named after the presence of spirits within the surrounding woods. The thing is… the legend is true.

“There is an evil held captive in the vast wilderness surrounding the town of Spiritwood. When Jed Guiness buys a place and moves to Spiritwood from Chicago, he accidently unleashes that evil. Now, he and a handful of others must try to re-capture that evil before the entire town is destroyed.”

G.J.Wise lives with his wife in Silver Lake, Wisconsin.  He’s been writing for many years, seriously for the last few and has short stories published in both print and electronic anthologies and periodicals.  His debut novel, Spiritwood, was released December 1st.  G.J. Wise is currently at work on his next book length dark offering as well as many more short stories.  If you want more information about current or upcoming works, please visit his author page on Facebook or Amazon, or feel free to contact via e-mail at [email protected]

What ties George to Soldiers’ Angels? We would say his giving heart found us, but here’s how George tells it.

“Last Veteran’s Day I was thinking I should do something to show my appreciation to our armed services and their families in some way and I thought it would be a good idea to donate some of the royalties from the sale of my upcoming (at the time) novel Spiritwood. I then started asking friends and posting on Facebook for suggestions of groups. I got a lot of great suggestions including the Soldier’s Angels organization (from someone who volunteers for Soldier’s Angels). I did some investigation of the various groups, and Soldier’s Angels seemed like the best fit.

Writing this book is something that I’ve been working on for a while and any personal monetary rewards are secondary to actually completing the task and having people read and enjoy it.  I have another job working for a great company (Loudspeaker Components, LLC in Lancaster Wisconsin) and I thought this would be a great opportunity to pay back some of the good fortune I’ve had in my life to the most deserving people I could think of, members of the armed services and their families. I also wanted to tie it to the book because the royalties come in for as long as the book is sold and so could be ongoing for an extended period of time and not limited in any way.

I did make a commitment to donate a minimum amount regardless of the book sales, but there is no limit to the top end and I hope to be able to donate much more than my minimum commitment.  I also intend to continue with any other books I write in the future.”

“My oldest brother retired as a Major from the Marines and I have other brother-in-laws, nephews, cousins, friends and other acquaintances who are or have been members of various branches of the armed services. I respect and admire the courage, honor and selflessness of every member of the armed services and their families as well.  I know that as a nation we don’t do enough through government programs to support them and I’m thankful there are organizations like Soldier’s Angels that help to fill in where tax funded support falls short. I am also happy that Soldier’s Angles organization has been so helpful in getting me set-up to be able to do this.”

We’re elated to be working with George! If you want to know more about him, you can follow him on his Author Page on Facebook or on Goodreads.

Don’t forget to pick-up a copy of his book on Amazon.