National Dog Day is Saturday, August 26th. The U.S. military has about 2,500 active Military Working Dogs (MWDs) today, with 700 or so deployed at any one time. These intelligent canines go through rigorous training. They’re trained to attack, track, and detect bombs, gases, weapons and drugs.

Dogs have been in combat with U.S. soldiers during every major conflict. They are extremely valuable to the military and to their service members. Angels on the Deployed Adoptions Team can sign-up to adopt a service member who has a K-9. Currently, we have 13 troops registered who have K-9s. Here are a couple of them.

Megan is a Veterinary Tech who is attached with the K-9s and their handlers. While Megan doesn’t have her own K-9, her job is to medically care for Mine Detection Dogs in her unit. If anything happens to them, she is there to provide medical aid.

“I do get to care and love on the MWDs though, which is what makes my job so amazing.”

Here’s a photo of her and Lasko, one of the Mine Detection Dogs. 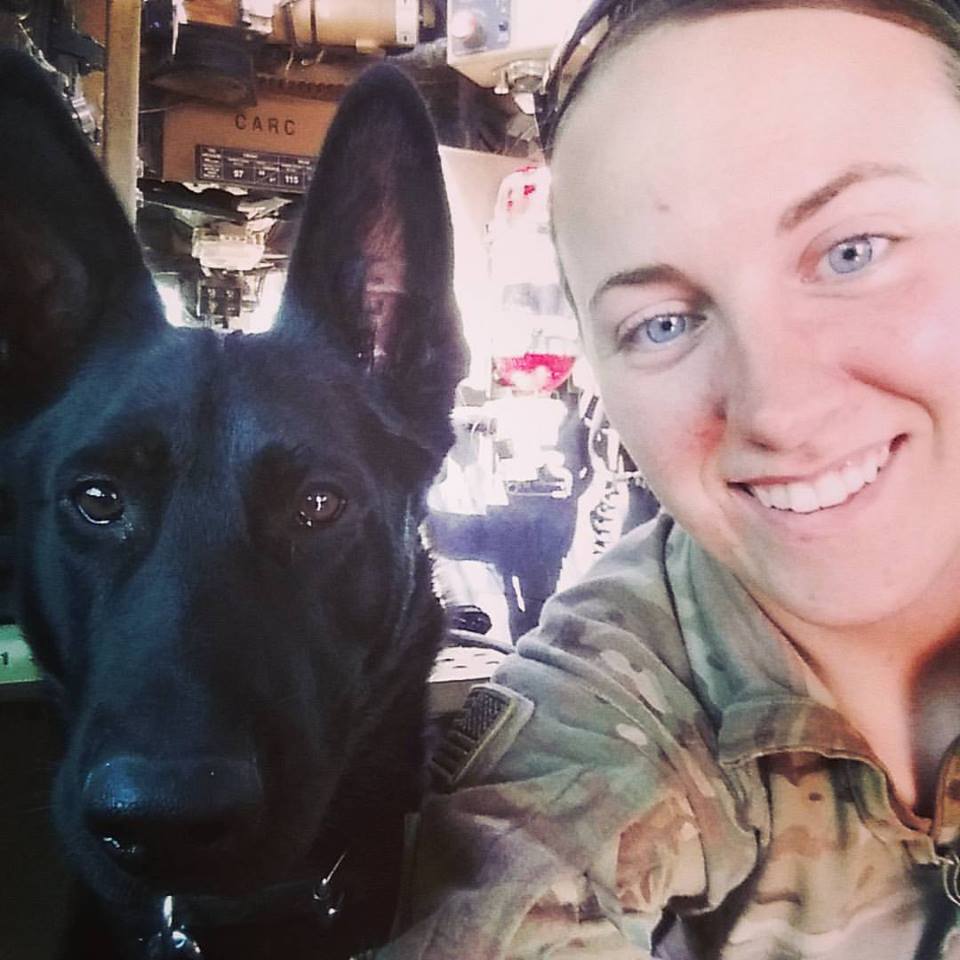 Jordan has been in the Army for just over 2 years. He works alongside his K-9 partner Bob, who is a MWD (Military Working Dogs). Bob is a 7 year old German Shepherd PEDD (Patrol Explosive Detector Dog). They have been a team since March 2016.

“I feel like I have a very special connection with my MWD, one that is quite familiar to many K-9 handlers. I trust Bob with my life at the same level, maybe sometimes even more, as my fellow soldiers with whom I deploy with.

As a PEDD, Bob is dual certified in both controlled aggression and explosive detection, meaning he is trained in the attack, location, and subduing of any hostile subjects (controlled aggression). Additionally, he is capable of searching for and locating: IEDs (Improvised Explosive Devices), HMEs (Homemade Explosives), and both Military and Commercial grade explosives, in any given environment. This includes, but is not limited to: roadways/routes, buildings, vehicles, open areas i.e. areas for helicopter MEDEVACs, and anywhere that is required for our given mission.

As an explosives dog team, it is about more than just certifying and finding explosives in a combat zone. We also work Law Enforcement at our home duty station to deter, seek-out, and halt any possible criminal activity or even conduct general public assistance. This includes: searching areas for explosives prior to a VIP meeting, conducting traffic law enforcement, clearing unsecured buildings for any possible subjects, searching for escaped subjects, and even locating missing children or persons.

More than any of that, we are partners. We spend time playing each and every day. We train together, both with physical exercise, and with improving his basic skills such as obedience, explosives detection, and controlled aggression.

I give him love and affection in order to foster a real state of trust between us, trust that he will keep me safe and that I will do the same for him. I am excited each day when I get to bring him out of his kennel and spend time with him, just as I see in his eyes and his demeanor when I grab his gear to get him ready for a day of work.

I love my job, I love my MWD, I love every moment that I have gotten to spend with him, and I look forward to each new adventure we will go on. We thank everyone, all of our sponsors from Soldiers’ Angels, those who serve from the rear in other support groups, and our K-9 family, as well as my blood family back home who supports me everyday.

Thank you for your service in supporting our duty to protect the freedoms we all hold dear. GOD Bless, and keep up making every deployed service member and K-9, including myself and Bob, feel like we are not alone when we are out here away from home. We may be fighting in a foreign land, but EVERY SINGLE one of our supporters back home is making it that much easier for us to do what we already do every day.” 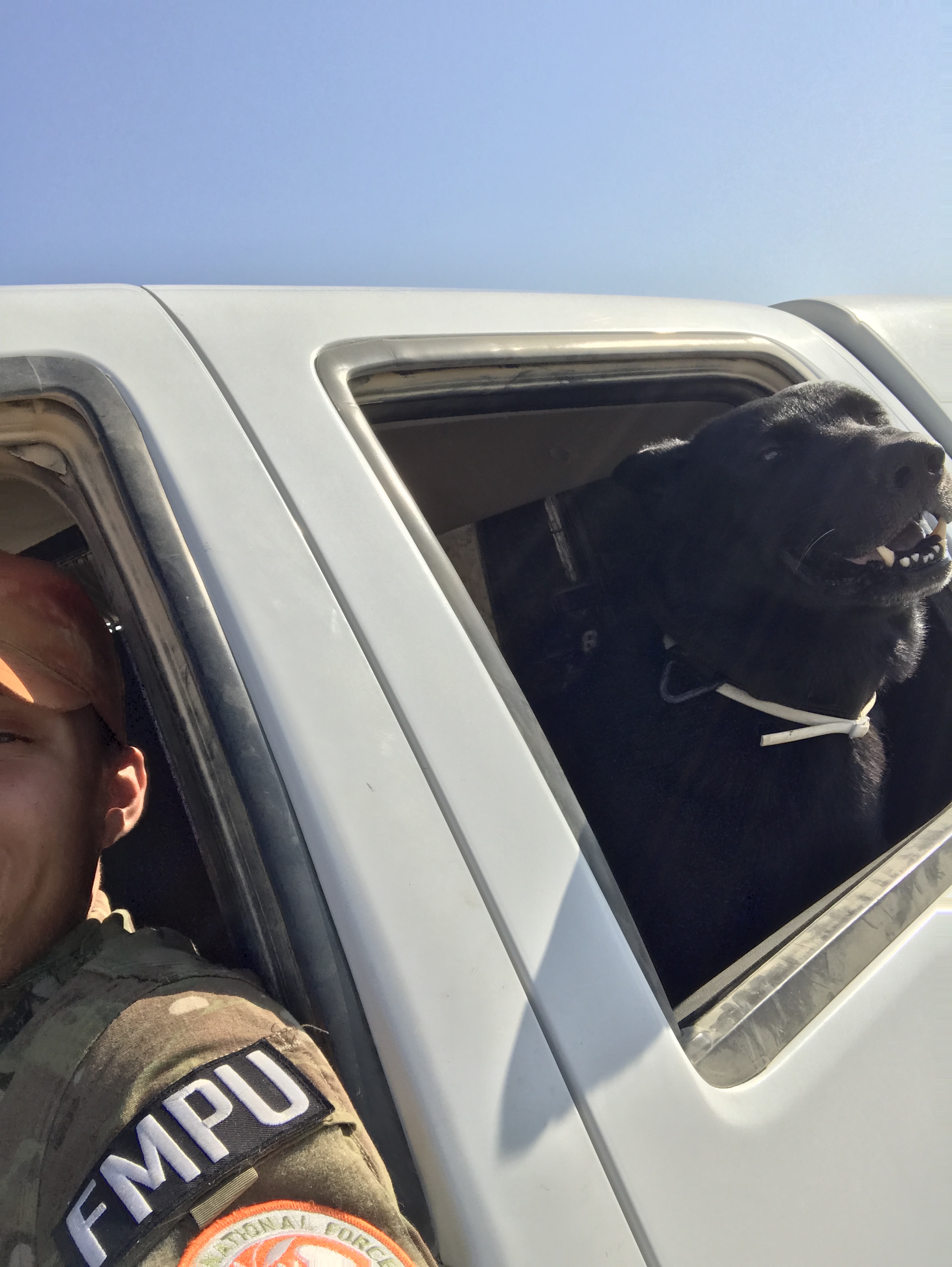 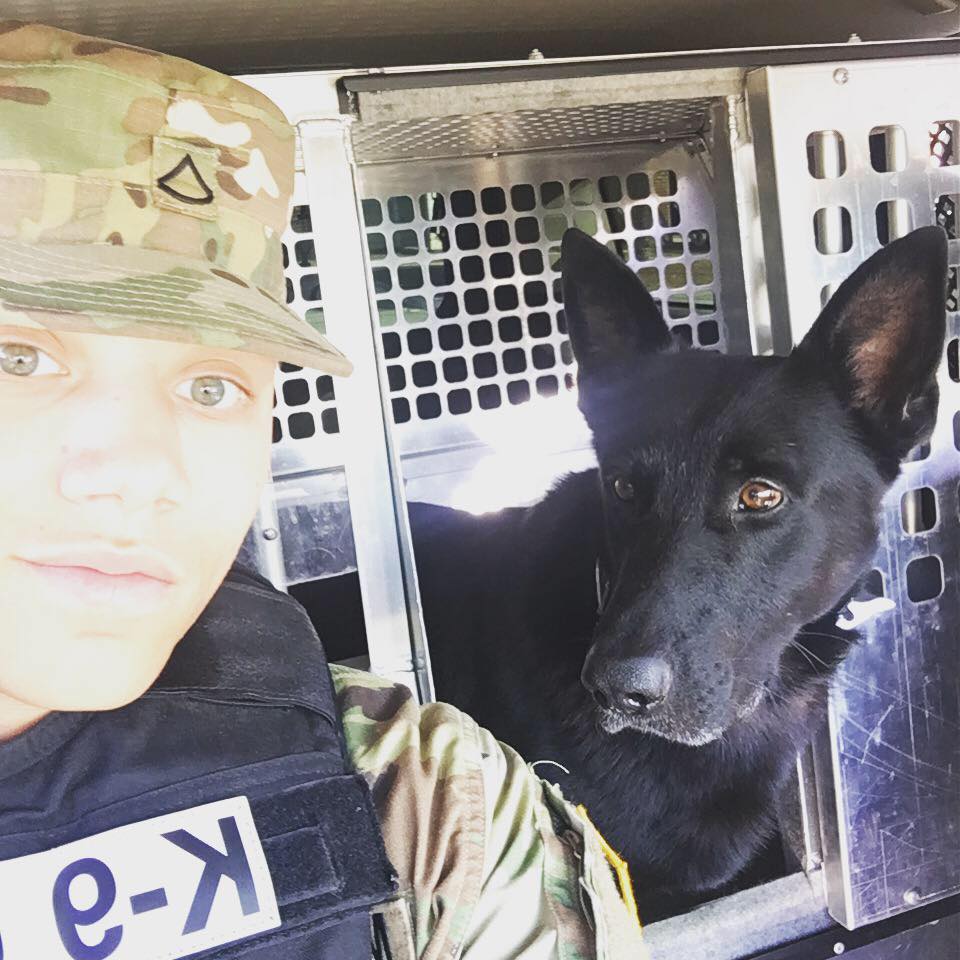 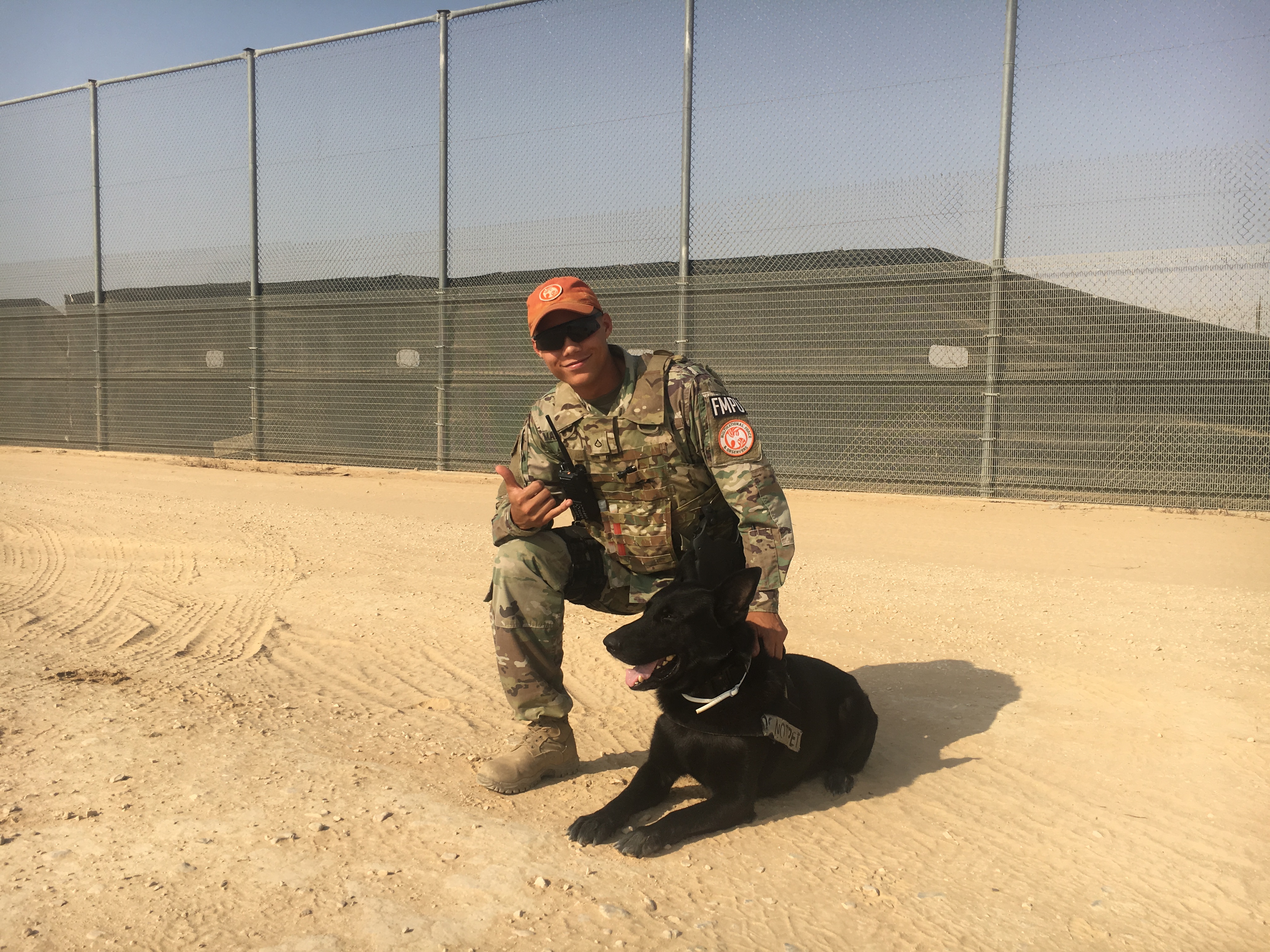 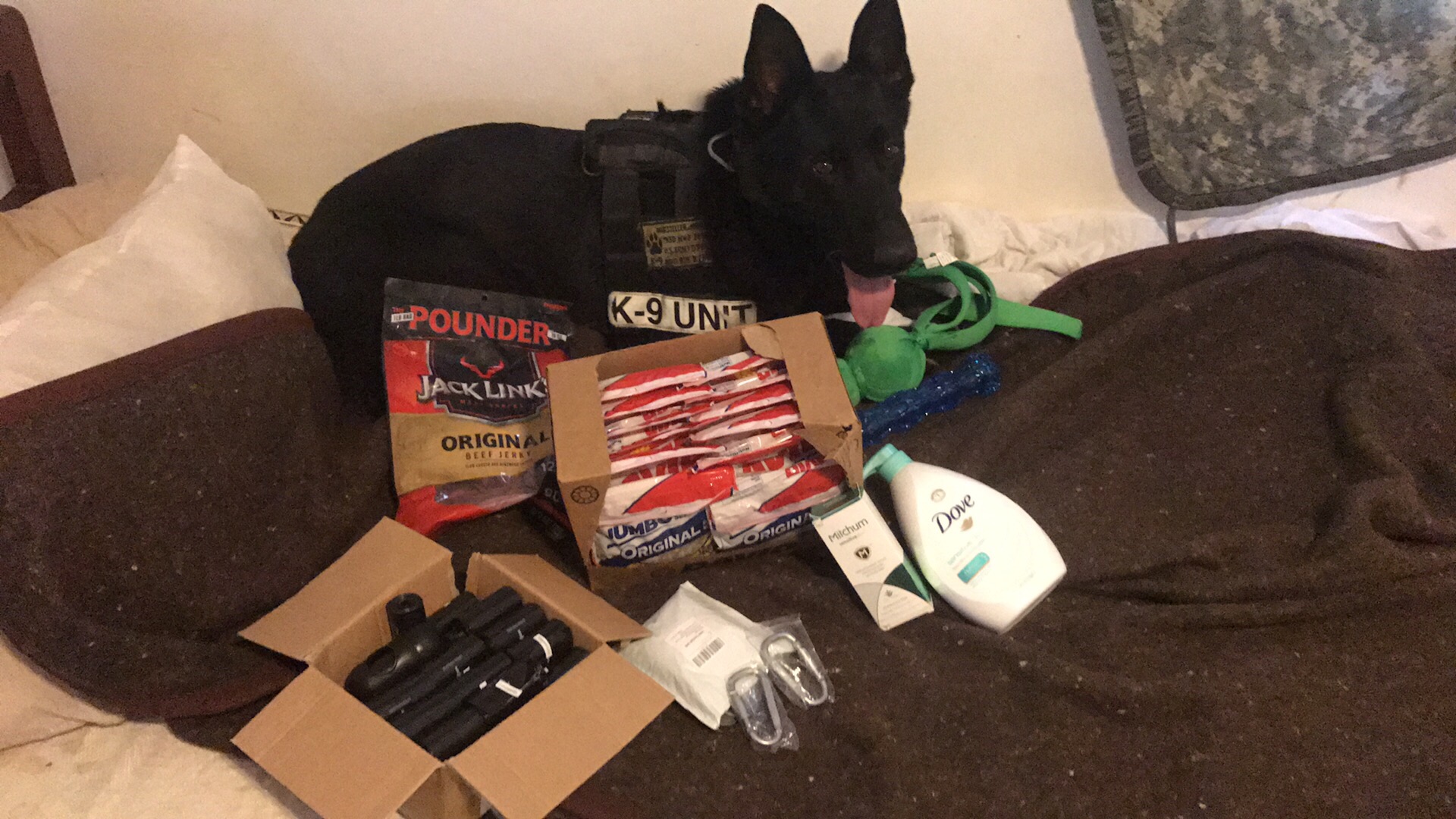 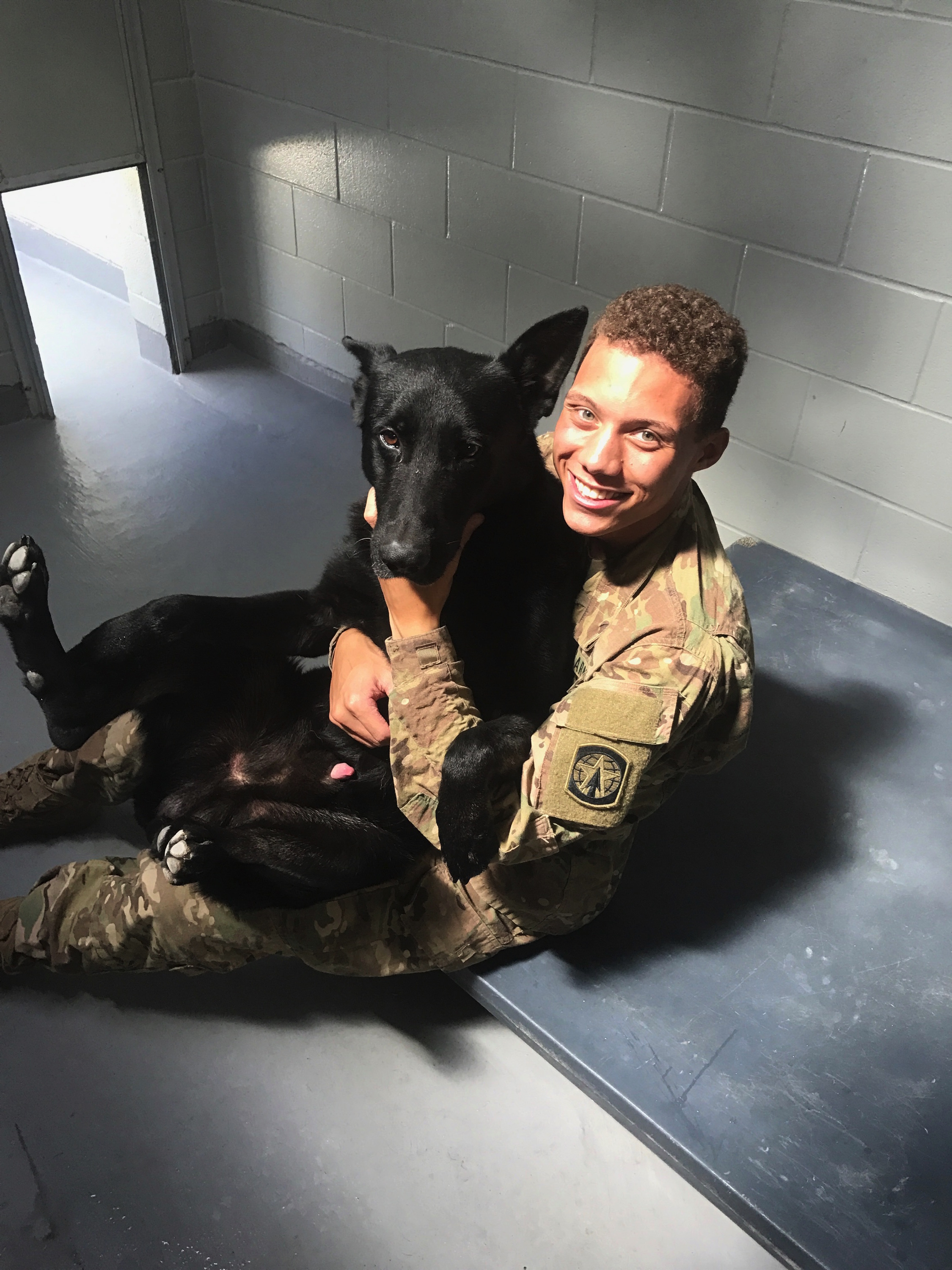 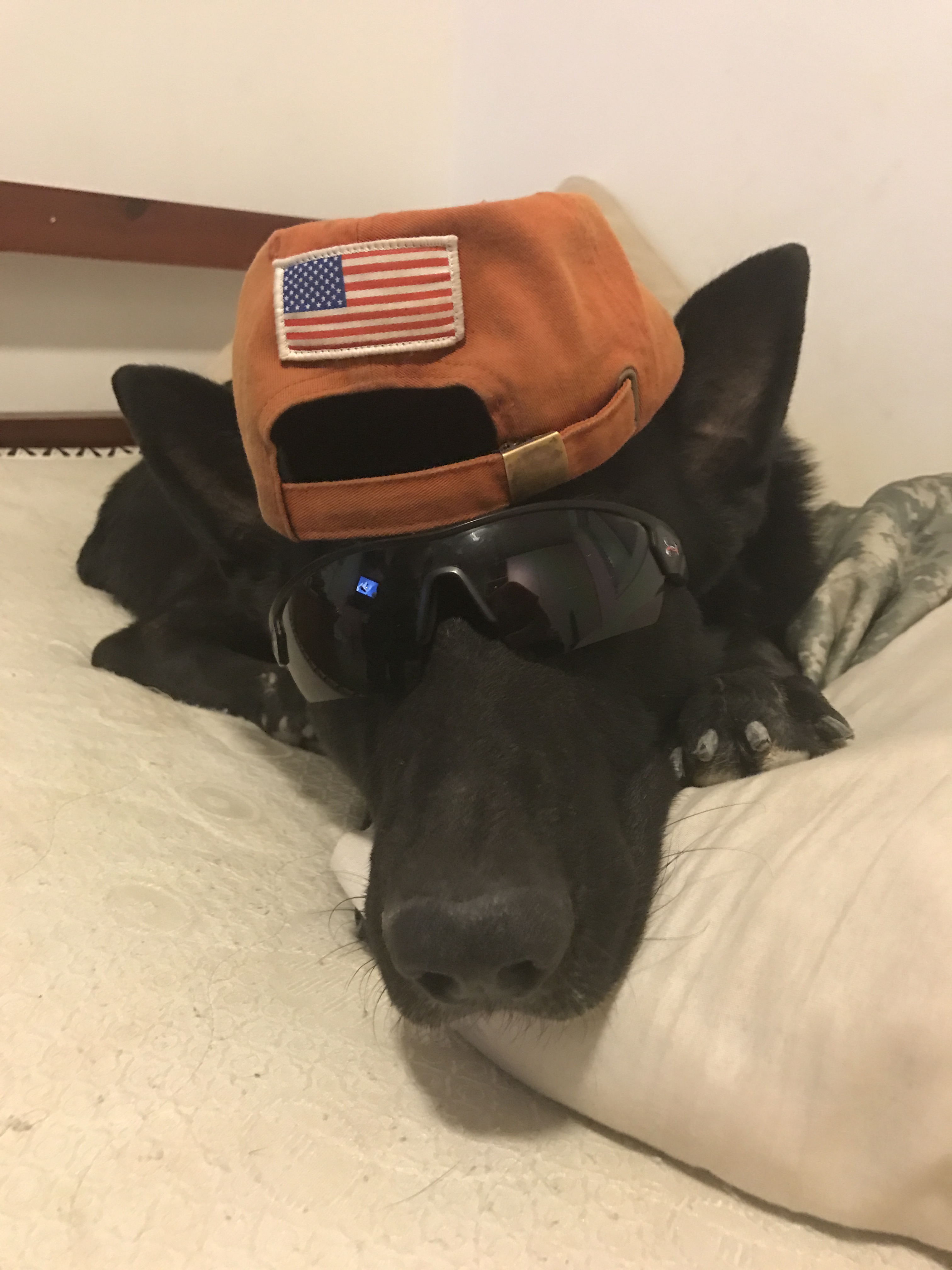 SGT Bailey and Ttitan have been working together for almost a year now. Ttitan is a 9yr old Belgian Malinios who’s trained to detect explosives.

Here’s what Bailey has to say about his K-9 companion and the support he recieves from Soldiers’ Angels.

“Although he’s 9, he still acts like a young pup. He’s very energetic and loves to play fetch. This is the first time in Afghanistan for both of us. Ttitan and I are working very hard over here. It’s rough at times but we’ve had the pleasure to be paired with one of your volunteers by the name of Melanie. Melanie is absolutely amazing and have been supporting Ttitan and I since the day we got to Afghanistan.”

“Not only does she sends care packages for Ttitan and me, but she also keeps in contact with me to make sure everything is ok. Melanie has definitely made a tremendous impact on our deployment and I can’t thank her enough! She’s such an amazing woman. Thank you Soldiers’ Angels for being such a tremendous support system for service members.” 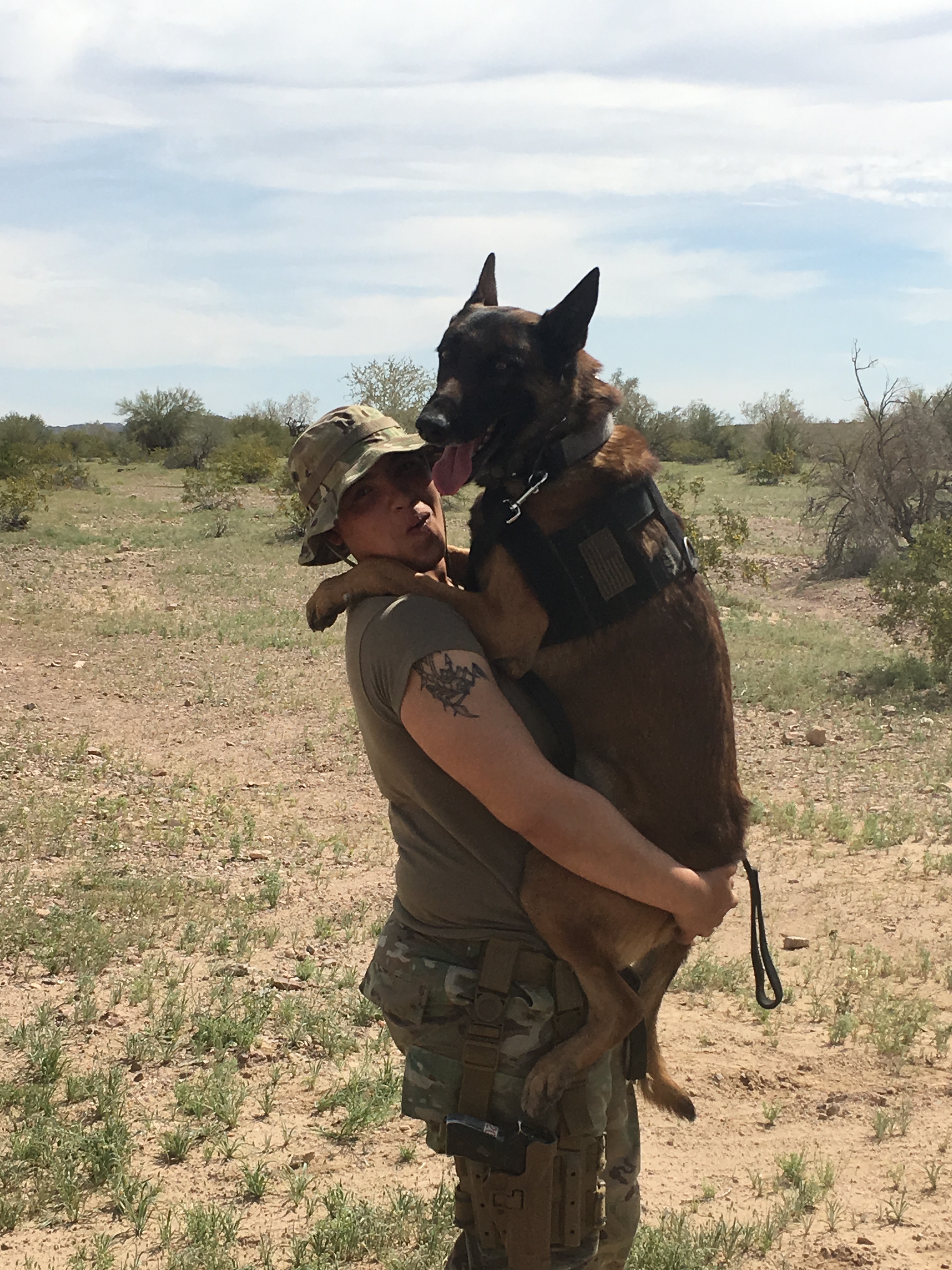 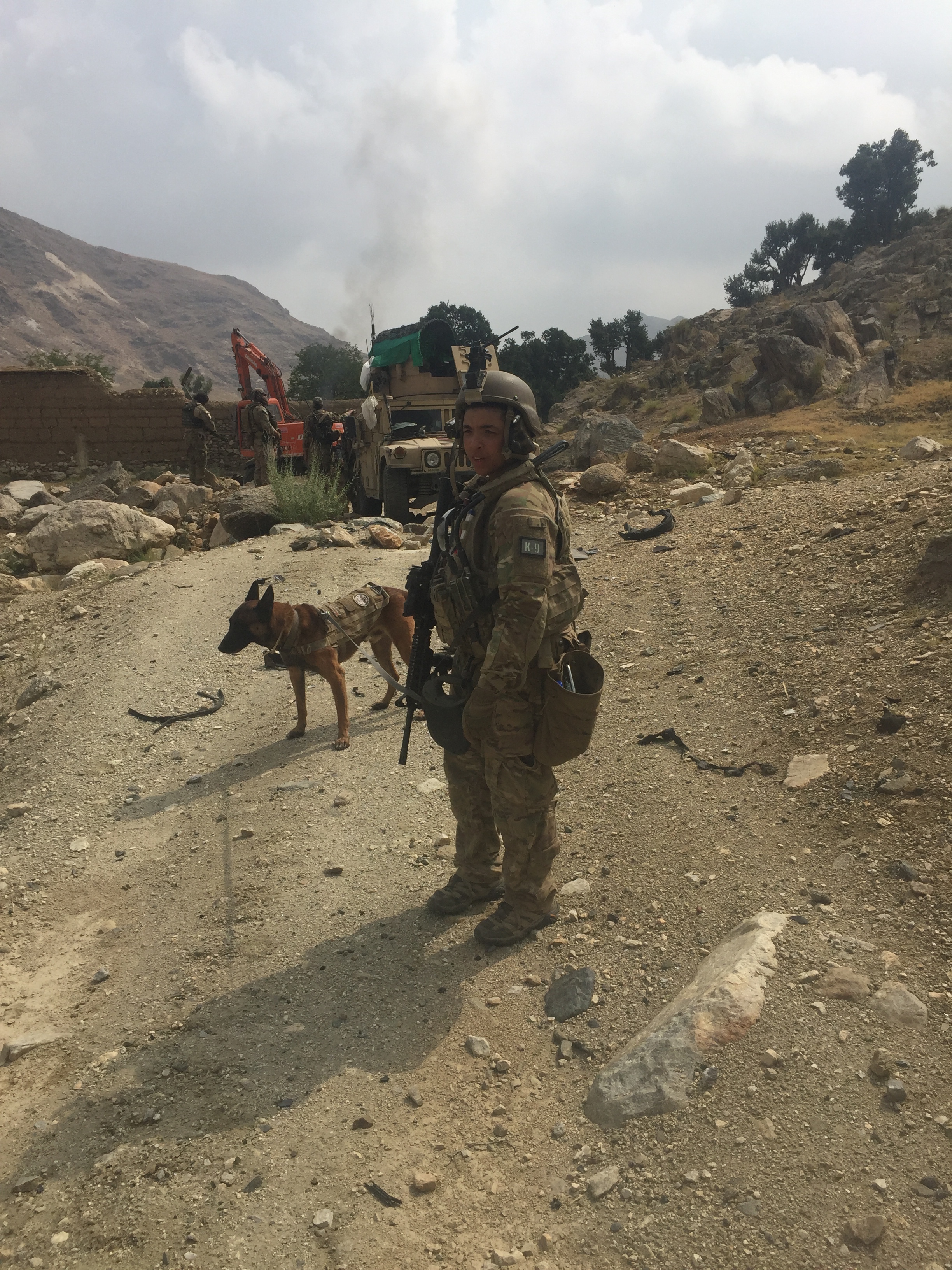 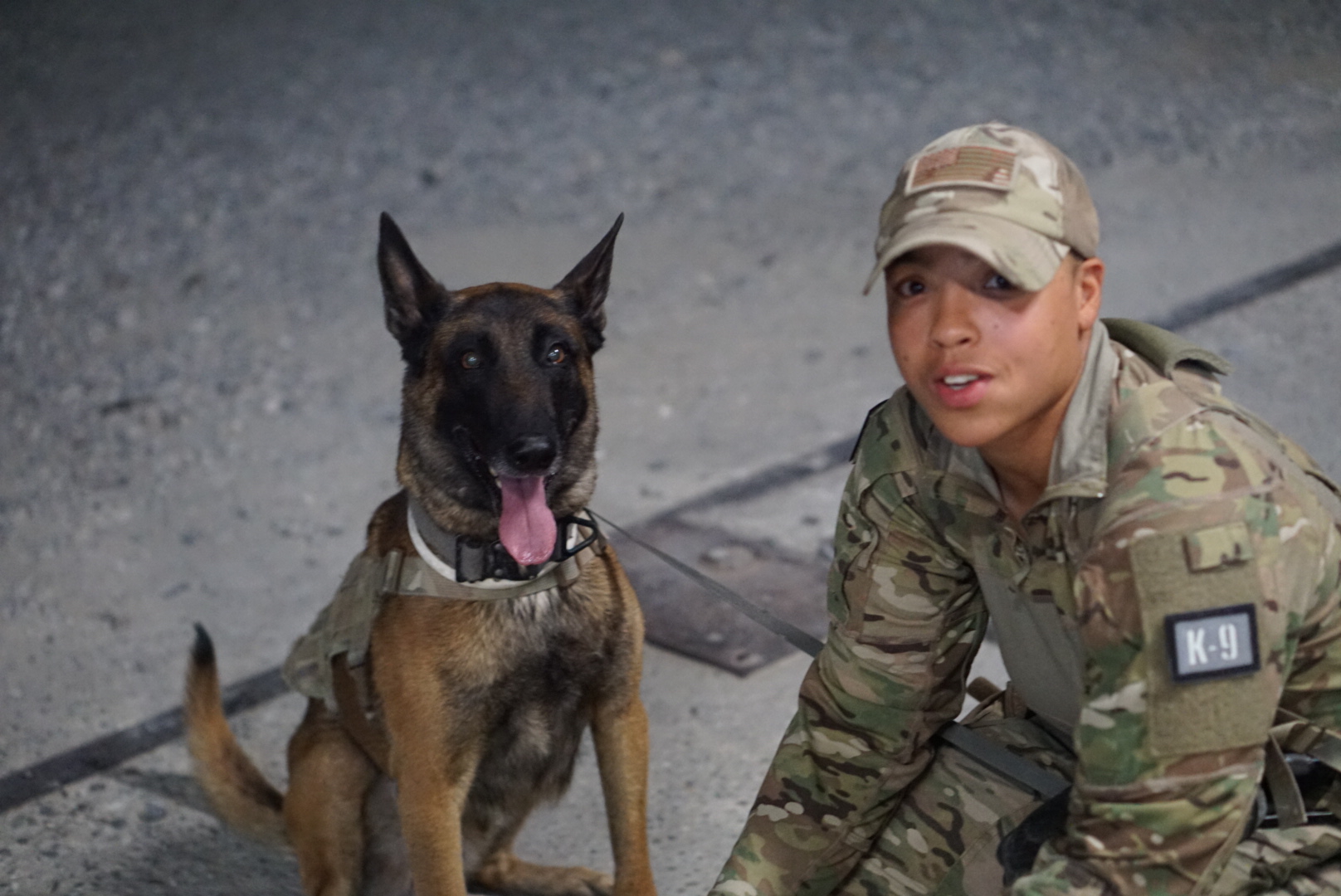 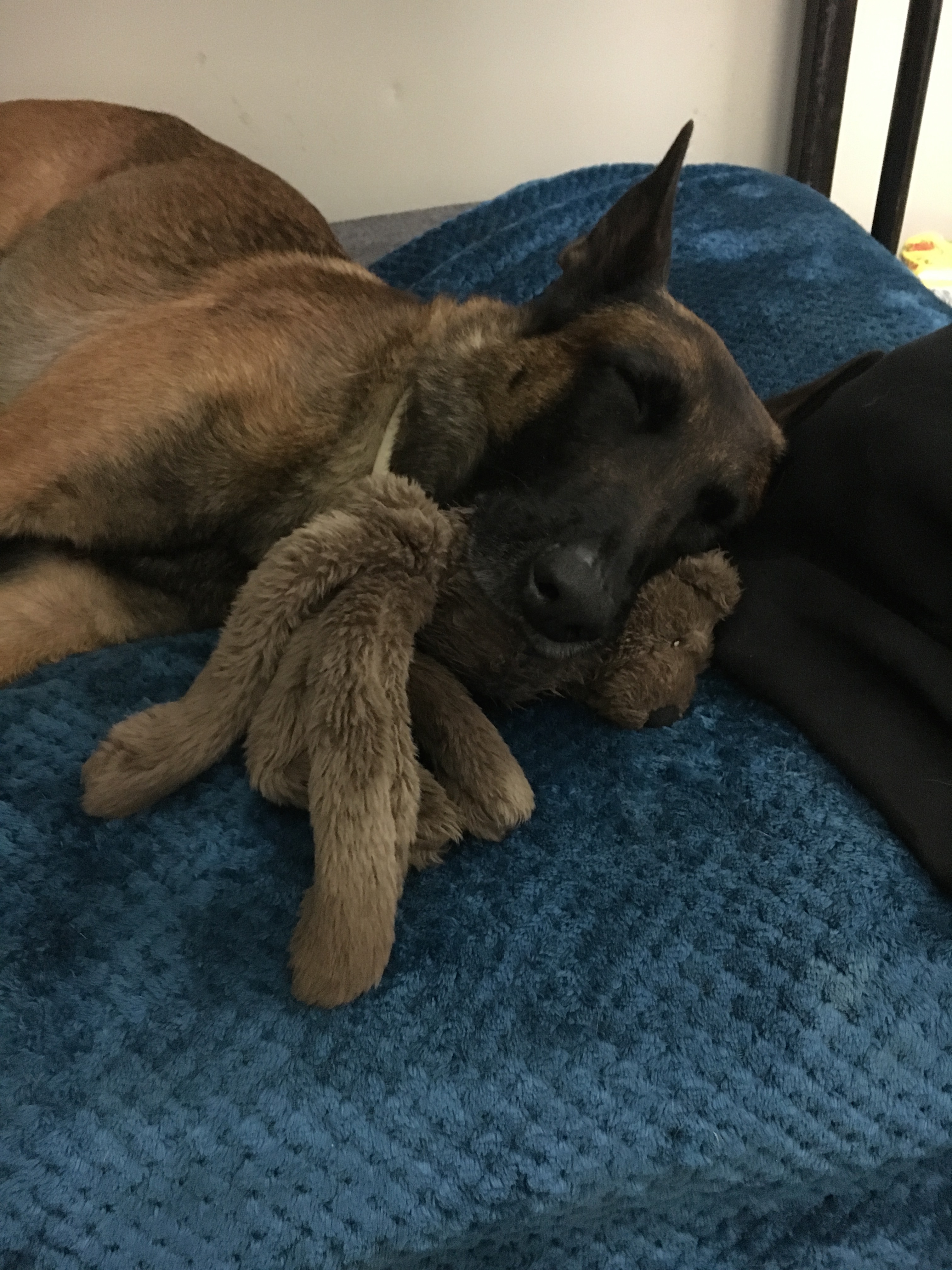 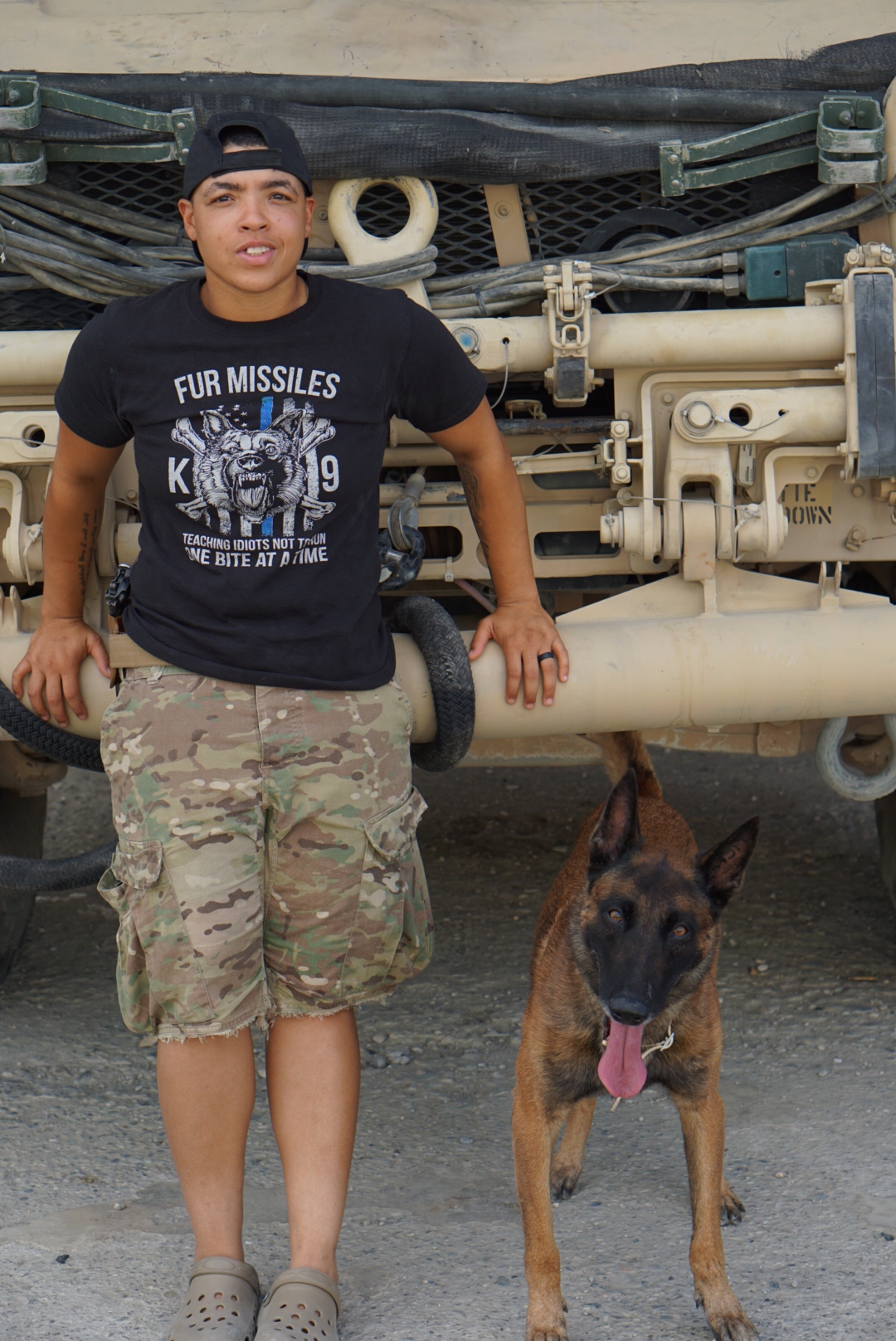